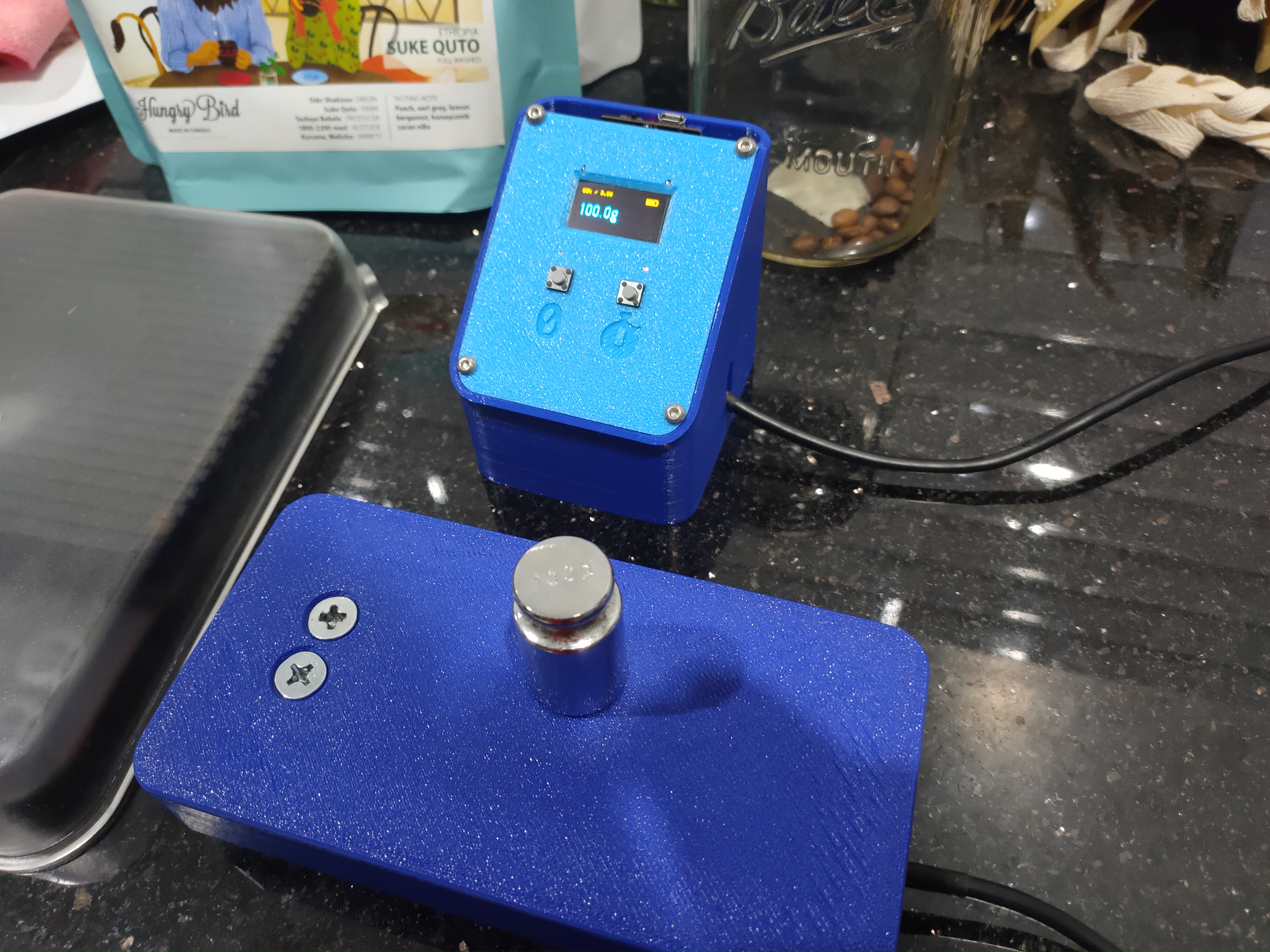 The prototype was done wrong. If you clicked through, you can see my original design. After the load cells arrived, I've spent almost 2kg of PETG to get that design to work. But it just doesn't. First, plastic flex. That design would probably work if I can laser cut aluminium (I've actually looked into a laser cutting service). But I have another problem when I mounted the OLED on the platform, when I put something heavy, the wires actually pushing the platform up making the measurement not accurate. Which made me not wanting to pursue this design any further with aluminium or other means.

On to the final design. Well, "final". I went with 2-part concept, the controller was the best I can come up with quickly, without desoldering or making any other changes to the electronics part. If you were to build this, I highly recommend you redesign this part. This has wires rat nest inside, which I believe it becomes the source of the noise (which makes it still jitters at ±0.1g). I have better stability on the original design when it worked. Which means, a better controller should be coming soon.

Build guide, codes, and STLs are available on GitHub.

Load Cell: I bought 2 from Ali, a $15 one and a $25. Neither are stable enough at 0.01g. The $25 one are more sensitive to noise. I went with the cheaper one because it is shorter, I'll have more room below the portafilter.

TTGO mini32: went with this one, mainly for a couple reason. Mainly, it has the LiPo charging circuit built in. And it's ESP32, so it has WiFi and Bluetooth built-in. WiFi is useless in a scale, but Bluetooth was great in MK1. I can't use the same app as before, but I do have plan for it in the future.

ADS1232: faster and less prone to noise than HX711 makes it a no brainer option. It should be way more popular because of it. The lack of resources online makes me think that it deserves its own post.

That's it. Put those 3 things together, add a battery, and you're done. With the exception of the controller, I'm quite proud of the design. It has 3 modes:

This design also means that I can just get a super accurate (and very cheap) 500g/0.01g load cell and just plug it into the controller. 10 seconds to recalibrate, and it's done. Another bonus since I code things myself (and the fact that ESP32 has built in RTC), I added a countdown for the timer. Technically unnecessary to brew a good coffee, but it very much soothes my OCD bone.

Final thought, now that I'm not size bound, it'll definitely worth it to work on a better controller. Maybe even just make the exact ADS1232 reference design or add a bunch of filters. Or simply just solder them together instead of rats nest in a box.

I need a bit of break first, this build was much harder and took waay longer than expected. I'm glad that it works, have made many delicious coffee with it. The countdown totally makes the brewing feels less hectic, especially when pulling espresso shots. Again, the build guide, codes, and STLs are available on GitHub.