The main difference of Katara compared to the predecessors is the use of a true water heating element (instead of a crockpot or rice cooker) and the water pump. It is a true immersion circulator. It can retain water temperature within 0.1ºC swing. It as 1500 Watt water heater, so 16 litre room temperature water can reach 60ºC within 15 mins or so. Anyway, Sous Vide is Sous Vide are so 5 years ago, but perfect steak, everytime. Let’s move on.

My favourite feature, by far. Thanks to the AutoConnect library, this thing is amazing. There are many WiFi manager for the ESP32, but it’s the only one I’ve found that has the captive server out of the box.

Sidebar: if you don’t know what captive server is, it’s the pop-up you get when you joined a free wifi in airports or cafe.

It’s the most intuitive way. First you connect to the device’s WiFi, then it pop-up a thing so you can set it to connect to your home WiFi. You don’t need to memorise any IP address. The only downside, this and Blynk took like 70-something % of the ESP32 flash memory. That brings us to the next feature.

Blynk is like an app (both iOS and Android) for your DIY IOT device for “free” and with minimal coding. You don’t need to roll your own API and server (in a way, I’ll get back to this later), and you most definitely do not need to code your own app. Blynk itself is quite confusing to use and a tad buggy, one thing in my code still causes a kernel panic. And you do BLYNK_WRITE() to read some values off of the app.

Blynk is “free”, upon registering, you get something like 2000 energy. And energy is their currency for buttons, LED, graphs, etc. If you need more, there’s IAP to get more energy. Unless, you roll your own blynk server, it’s dead simple. Just cut and paste a couple of things from the docs, I have mine run on my OctoPi.

And more importantly, I added a Blynk tab on AutoConnect with custom server support.

These are the major features that bring Katara works like a commercial product. Technically you can get everything from BOM. Follow the build guide. Figure out the water heater. Upload the released firmware as is. And it’ll work.

However, this is one of those projects you can’t cheap out on. It has been about a month long journey for me. Stressful but fun project I did in awhile. The final tally for the BOM is a bit under $60 (almost triple my original budget goal). Compared to an Anova (about $130) or a Joule (about $200), it’s a bit of money saving project. Especially over here, Anova is sold for almost $300 in local marketplace. 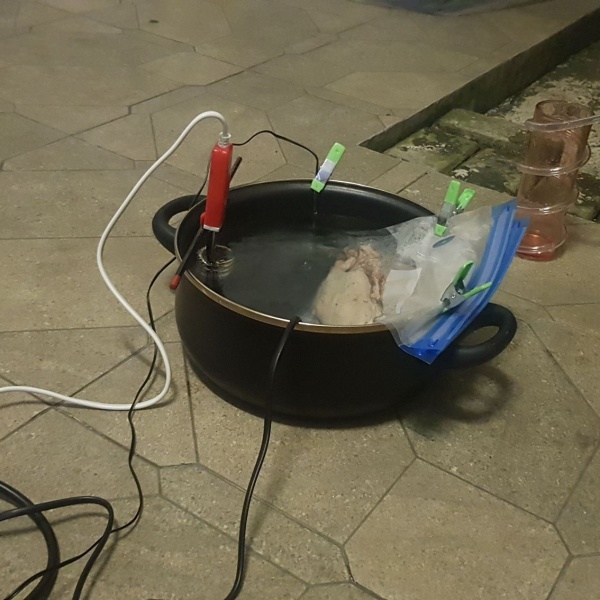 There are people who are selling these DIY Sous Vide “kit”, a death trap kit is what that is. If you were to build this, approach it with caution and respect. As with any other project that uses the AC line.

There we go, another CoronaCraft in the bag. Be safe, wear mask, and enjoy your steaks.

Bonus: my next project is called Libra, should be obvious of what it is. Another revisit of my project from 5 years ago. Should be easy and fun.